Medical cannabis was confiscated from a mother who tried to bring it home for her nine-year-old daughter who suffers from severe epilepsy.

Emma Appleby and her daughter, Teagan, were stopped at Southend Airport after flying from Amsterdam. They were carrying £4,500 worth of cannabis oil capsules, which they bought from the Dutch capital after they were refused a legal prescription in the UK.

While the family was released, customs officials seized the medical cannabis as it is illegal to bring the drug into the country without proper authorization.

The cannabis oil that the Border Force confiscated was three months’ worth of medication for Teagan, who has a rare chromosomal disorder. The girl also has Lennox-Gastaut syndrome, which causes as many as 300 seizures a day.

Doctors in the UK refused to give Teagan a prescription for medical cannabis that contains a high concentration of THC, which is the main psychoactive compound in cannabis. Mrs. Appleby believes that a combination of THC and cannabidiol (CBD) will significantly reduce her daughter’s seizures and relieve her symptoms.

Mrs. Appleby said that her daughter had seizures every day and every night. With these multiple seizures, she’s never sure whether her daughter will wake up the following morning.

According to her, medical cannabis is their last resort as they have already tried all treatment options available to them in the UK, including a succession of pharmaceutical drugs and diets. These conventional medications, she explained, have either failed to reduce Teagan’s symptoms or caused severe side effects.

However, while trying to get access to medical cannabis in the UK, she was “passed from pillar to post,” only to be met with a flat “no” each time. Her request for an import license on compassionate grounds was also refused. As a result, she secured a prescription in Rotterdam.

And with the money she raised from crowdfunding, Mrs. Appleby was able to purchase three months’ supply of medical cannabis at a pharmacy in The Hague.

Yes, it sounds like the case of Billy Caldwell all over again. Both scenarios involve a parent illegally bringing home medical cannabis to save their child and airport authorities confiscating the medication.

The only difference is that Billy’s story ended well, with authorities returning the 13-year-old’s medicine after he was hospitalized a few days later. 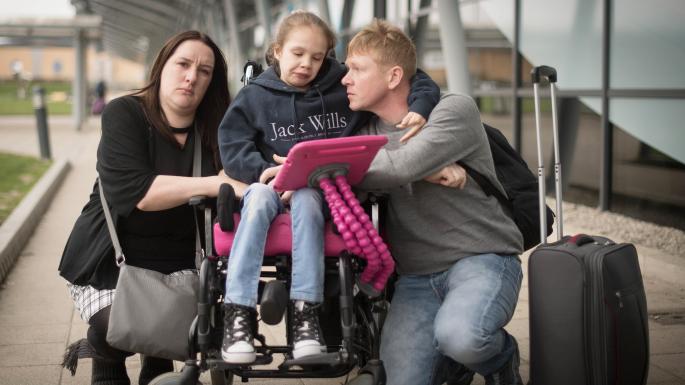 Billy’s case was one of the reasons why the UK government was pressured to do a review of its cannabis policies. This review resulted in the Home Office making it legal for specialist doctors in the country to prescribe medical cannabis to qualified patients.

However, despite this change in the law last November, specialists still do not willingly hand out prescriptions. This is because the liability falls on them in case things go wrong.

Mrs. Appleby said that she was “devastated” about what happened. But she vowed that she will fight to get her daughter’s medication back.

Ruairi Kavanagh is a journalist, editor and author with over 25 years experience across multiple specialised sectors including medical publishing, personal wellbeing, education, security, defence and international relations. He works with the team at CannabizDaily.co to create original, well-researched content about all aspects of this ever-expanding field.

SPECIAL REPORT: How to Sober Up from a Cannabis High

Most cannabis dispensaries in Colorado recommend weed for...

How Does Cannabis Affect the Immune System

Teenagers who vape are more likely to use...

Is Taking CBD Orally the Way to Go?

Find Us on Social Media

Get Listed: Add Your Business

Support Us: Contribute as a Guest Writer

Thank You for Subscribing to Our Newsletter!

We use cookies to ensure you get the best experience.I AgreeI DisagreeRead more